Yogi Bhajan, a Master of Kundalini Yoga by the age of 16 — itself a rare feat —gave his first lecture at a Los Angeles high school gym on January 5, 1969. Then a 39-year-old recent emigre from India, he left behind a government career in order to realize the vision of bringing Kundalini Yoga to the West. No matter that not a single person was present that evening; he came to teach and he proceeded to speak to the empty hall.

In the turbulent, drug culture of the 60s, Yogi Bhajan first reached out to the youth. He recognized their experimentation with drugs and “altered states of consciousness” expressed a deeper desire to experience a holistic, liberating sense of awareness and a longing for family, for connection with themselves and one another. Soon realizing that pharmaceuticals provided, at best, a cheap imitation to the peaceful, inner euphoria they could get naturally from Kundalini Yoga, and at worst, had debilitating physical and mental side effects, young people began flocking to his classes, arriving by the busloads. He created a family, known as 3HO (Healthy, Happy, Holy Organization) and soon 3HO teaching centers began springing up across the United States and throughout the world. 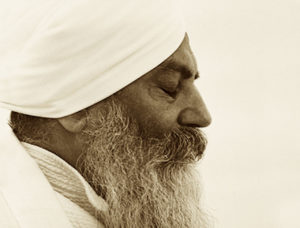 He sparked a movement whose many tendrils have wound their way into our culture. Yogi Bhajan blazed a trail, which today, after more than 30 years of determined effort on the part of 3HO and the Kundalini Research Institute, yoga and meditation have gained widespread acceptance in the West. This popular attention speaks not only to the proven benefits of yoga and meditation, but to the increasing public interest in spirituality and a healthy lifestyle.

Born Harbhajan Singh in what is now Pakistan to a family of healers and community leaders, Yogi Bhajan studied comparative religion and Vedic philosophy in his undergraduate years, going onto receive his Masters in Economics with honors from Punjab University. Years later, he earned his Ph.D. in communications psychology from the University of Humanistic Studies in San Francisco.

He emerged as a religious, community and business leader with a distinguished reputation as a man of peace, world-vision, wisdom, and compassion. He has authored and published more than 30 books on topics ranging from spirituality and consciousness to communication and psychology. He has founded several foods companies that manufacture and distribute natural products based on these teachings. He has fostered economic development in every community in which he participates, annually conducts business seminars, and has authored several books that provide guidance to both the aspiring entrepreneur and seasoned business executive alike. As the Siri Singh Sahib, or the Sikh leader in the Western Hemisphere, he has met with Pope John Paul II to discuss inter-religious dialogue and worked side-by-side with the Dalai Lama and the Archbishop of Canterbury to foster world peace.

Become a Teacher
Scroll to top

This site uses cookies. By continuing to browse the site, you are agreeing to our use of cookies.

We may request cookies to be set on your device. We use cookies to let us know when you visit our websites, how you interact with us, to enrich your user experience, and to customize your relationship with our website.

Click on the different category headings to find out more. You can also change some of your preferences. Note that blocking some types of cookies may impact your experience on our websites and the services we are able to offer.

These cookies are strictly necessary to provide you with services available through our website and to use some of its features.

Because these cookies are strictly necessary to deliver the website, you cannot refuse them without impacting how our site functions. You can block or delete them by changing your browser settings and force blocking all cookies on this website.

These cookies collect information that is used either in aggregate form to help us understand how our website is being used or how effective our marketing campaigns are, or to help us customize our website and application for you in order to enhance your experience.

If you do not want that we track your visist to our site you can disable tracking in your browser here:

We also use different external services like Google Webfonts, Google Maps and external Video providers. Since these providers may collect personal data like your IP address we allow you to block them here. Please be aware that this might heavily reduce the functionality and appearance of our site. Changes will take effect once you reload the page.